About ten years ago, I started dabbling in the world of meditation. I’m a little embarrassed to admit that my journey started with reading The Secret (thanks, Oprah) and taking it a bit too seriously.

In my defense, I had just ended a five-year, toxic relationship and was equal parts vulnerable and desperate for guidance. After The Secret, I paid an absurd amount of money for a 30-day meditation course by (you guessed it) Oprah and Deepak Chopra.

I tuned in every day to follow my breath and listen to lectures on pure potentiality. Nothing was too silly to try. I mean, it was Oprah! Oprah would not lead me astray.

Did I lie in bed at night visualizing myself happy and no longer in need of glasses? You bet I did!

For five years, I indulged in a pupu platter of meditation styles brought to you by the very best of the self-help aisle. I tried some RIDICULOUS things. If there was an app or a website out there peddling meditation, I was all in.

I visualized clouds and ribbons and cutting those ribbons which were supposed to make my troubles float away. (It did not.)

I imagined lights radiating from my heart center and little boxes in the middle of abandoned beach shacks meant to represent some inner layer of consciousness.

At one point, I paid $13 for an app that took me on a journey through the forest and flashed a strobing light at my closed eyes which was supposed to do… something. I can’t even remember what. I do recall that it had a warning for epileptics.

Hey, I was desperate.

Why Should You Meditate Anyways?

It’s worth noting why I was trying so hard to start a meditation practice.

At the time, every single self-help guru I was buying books from insisted that meditation was the key to a better life. I needed and wanted that to be true so I threw a lot of my emotional weight behind giving it a shot.

And sometimes it really did work. I occasionally had incredible meditation sessions that made me feel calmer and more clear-headed. I wanted to feel more of that and less of the wrenching anxiety I felt the rest of the time.

Simply put, I didn’t want to feel the way I felt anymore. I realize now the issue wasn’t with the practice itself, but the teachers I had chosen.

After years of trying (and failing) to make meditation be the silver bullet solution to all my problems, I was ready to give up.

I felt burned by the Deepak Chopra’s and Gabrielle Bernstein’s of the world. They promised me so much, made it seem so simple. I did everything those books told me to do and still suffered from anxiety and depression. They were full of shit.

The Universe of which they spoke did not have my back.

Or maybe it did because eventually, I found my teachers. I found books that helped me have a more realistic understanding of meditation and what it could do for my life. 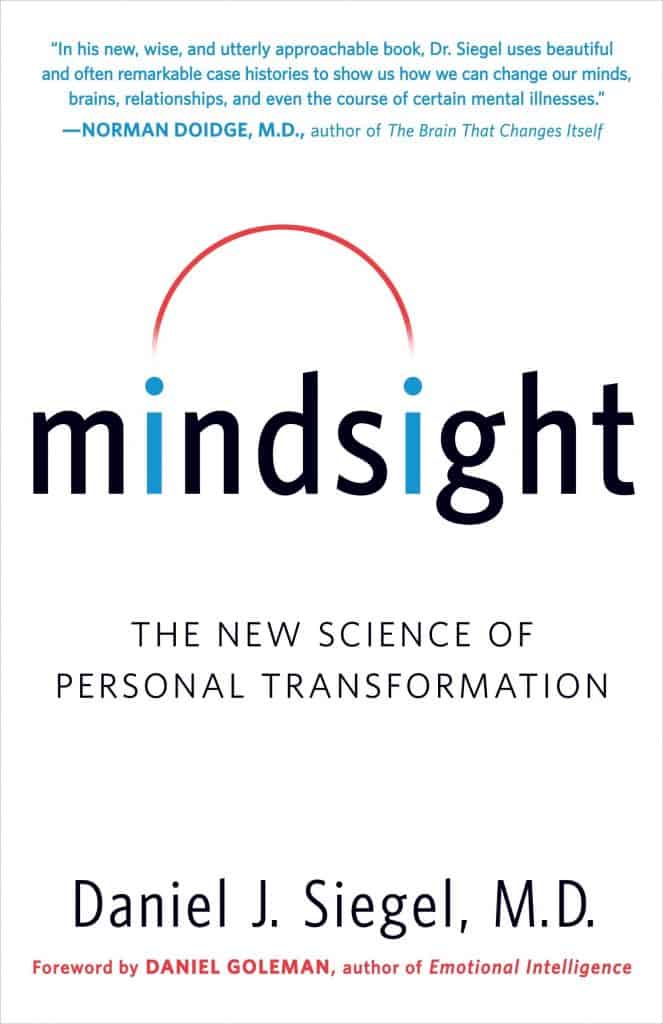 This book is incredibly useful for people who want to understand meditation from a neurological and scientific point of view. Does meditation really work? If so, why? How?

Siegel starts by explaining the inner workings of our brain and then dives into the research behind meditation and mindfulness. Using case studies from his own clients, he shows how mindfulness can help rewire and change the brain.

The skills presented in this book are easy to follow and useful. You aren’t misled to believe that you’re going to wake up the next day completely changed. All of the strategies take time and will lead to small, incremental changes that, in time, add up to a new way of being.

I appreciated the straightforward, academic approach to this topic. I’d had enough with the touchy, feely “new-age” stuff. This book was practical and convinced me to give meditation another chance.

2. Real Happiness: The Power of Meditation by Sharon Salzberg 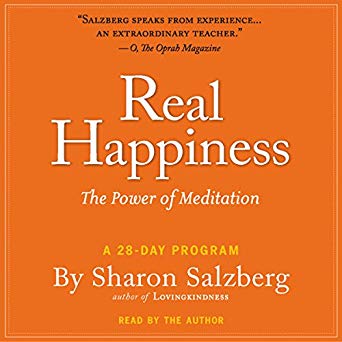 Salzberg begins this book by letting you in on her humorously neurotic foray into the meditation world. Although this book teeters on the touchy-feely, it is mostly refreshing and relatable. This is the first meditation book I read that told me it was perfectly normal for my brain to run wild when I tried to sit and focus on my breathing. Seriously!

Before I found this book, I was getting swallowed whole by teachers telling me to silence the monkey brain! Sweep those thoughts to the side. Make your brain go blank.

It never worked like that and I genuinely believed I was doing something wrong.

Not so. Thank you, Sharon!

Salzberg is a renowned meditation teacher who has been studying the practice since 1971. She knows her stuff and presents it in a way that makes you feel at ease with the process. There’s no right or wrong way. Struggling is normal, even for experienced practitioners.

I needed to hear (read?) these things to overcome the frustration level I’d reached with my own efforts.

This book is primarily a 28-day program for starting a meditation practice and I highly recommend it to anyone who is interested in getting started in meditation or improving their current practice.

This book is a very quick read and worth every minute. Dan Harris is an American news anchor for ABC News. In 2004, Harris had a panic attack during a live broadcast of Nightline. Here’s a clip of Harris describing this moment:

After his public meltdown, he realized he had to do something. The book takes us on a journey of how the highly skeptical news anchor became a devout practitioner of meditation.

I love this book because of the masterful storytelling and the glimpse inside of Harris’s emotional world. It reignited my belief in meditation as a transformative tool.

What I appreciate about this book (and I’m sure you notice a trend) is that it is both realistic and relatable. Harris did not fall easily into meditation. He doesn’t buy what everyone is out there selling. He struggles for a long time before it clicks.

It’s also a great story. Harris is funny, if not a bit snarky (which I enjoy). He keeps it real and lets you behind the scenes of the surprisingly ruthless world of national broadcast news and reporting. I was as fascinated by this book as I was encouraged.

Buy it on Amazon here

that is equally good and also on sale for $2.99 on the Kindle version!

If you read this book and love it, Dan Harris also has a brilliant podcast to check out called, 10% Happier with Dan Harris.

So How’s It Going Now?

Gone are the days of strobe light apps and books that tell me I can cure cancer with my mind. I’m in a place where meditation is an important tool in my life but no longer adding to my frustration.

If I have a session where my mind is running wild, it just is what it is. I’ve eliminated a lot of the judgment I attached to my meditation practice and, as a result, have benefited from it much more than I was in the beginning.

I’ve found some great resources to keep up with my practice. I’m not as consistent as I’d like to be and I could definitely work harder to deepen my practice, but for now, it is serving me well.

It’s taken some time, but I see the results. Before, I was trying to solve everything with meditation and it didn’t work that way. My expectations were unrealistic.

I had to stop drinking, see a counselor, and use medication IN COMBINATION with meditation to get where I am today. There is no shame in any of it.

If you’re battling with depression, addiction, anxiety, or feeling like the negative little voice in your head is running the show, a meditation practice will help.

What meditation tools do you use? What kind of meditation do you practice?

The Easy Way You Can Break Bad Habits Starting Today

Why Everyone In Sobriety Should Start A Meditation Practice, Including You