The Dangers Of Black And White Thinking

Do you ever catch yourself using extreme language for things that don’t require it? Here’s what I mean.

I had the worst day at work today!

She’s so gorgeous and I’m a disaster.

We’re all guilty of occasionally saying things like this to ourselves. But if you catch yourself doing it a lot, you’ll want to pay attention.

Okay, so what is black and white thinking?

Black and white thinking, also known as splitting, is the tendency to view the world mostly in extremes. It is a dichotomous or binary thinking in which you narrow your worldview into either/or terms.

There’s no grey area for you.

Everything is all or nothing. Either you’re 100% committed to this diet or you’re stuffing your face with whatever you can get your hands on. If you mess up and have a cookie? The entire diet is destroyed! Throw it all away. You’ll never be healthy. You can’t do it!

Either your partner is doing everything exactly right or your relationship is doomed forever. You either hit the gym five days a week, or you quit and stay on the couch. Obviously you’re not committed to fitness and never will be.

While it might sound a little crazy to read or say out loud, a lot of us have these exact conversations with ourselves daily. (Guilty!)

Aside from being a bit annoying, what’s the problem with black and white thinking?

And that’s not good.

Here are a few pitfalls of black and white thinking on our daily lives:

We can’t see ourselves or others in anything but black and white terms.

I am a good person or I am a total failure who never does anything right. She is a good friend or she is a flake who doesn’t really care about you.

That guy you went out with didn’t text you back this morning because he’s not actually into you and you’re probably going to be alone forever.

Beyond the obvious ways in which this kind of thinking is self-limiting, there’s actually a huge impact on your mental and physical health at play as well.

There is a direct link between people who engage in constant black and white thinking and mental health issues like depression and anxiety.

All or nothing ways of thinking illicit strong emotional responses in our bodies which triggers the fight or flight response. This translates to chronic stress that feeds our depression and anxiety.

It’s hard to relax and find peace when you’re constantly cycling through extreme emotional responses to things that don’t require them.

And since our brain’s are predisposed to amplifying the negative, living in a headspace that is constantly framing things in terms of “worst, never, always, forever, never, every” is doing major harm to our mental health.

Better Help has a really useful take on this:

Unfortunately, the more someone gives power to these negative thoughts, the more likely they are to notice situations where the negative thoughts are manifested as truth. When we reach this stage of black-and-white thinking, life can become very challenging.

This kind of thing snowballs. For many of us who struggle to escape this thought pattern, it can lead to more drastic coping mechanisms like drug or alcohol abuse.

I’m the worst, most unlovable person who ever existed!

I used to struggle with black and white thinking A LOT. Of course, I didn’t know it at the time because I refused to get help for my anxiety and depression. So I suffered.

I worked a high-stress job in which feedback was a constant feature. No matter how I hard I tried, I could never escape the desire to want to cry whenever someone gave me tips for improvement. It was a visceral reaction that welled up in my throat and stuck itself there for the duration of the meeting.

And I used it as evidence that I would never be good enough.

It didn’t matter that in that same meeting I’d be given examples of things I’d done well or improved upon. The negative feedback was all I heard.

Even though I KNEW that job wasn’t really for me, I was too afraid to branch out and try something new because the story on loop in my brain is that I would never be good at anything or successful.

Why did I think that?

Because my brain translated any hiccup, challenge, or critical feedback as evidence that I was a complete failure. So any efforts to try something new was quickly ended as soon as I hit a bump.

Same was true for my dating life.

I couldn’t just appreciate a good date for what it was. My mind would blow that whole scenario wayyyy out of proportion. Obviously this is my person.

And when my new beau didn’t return a text in a timely manner, my brain would go into worst case scenario mode. I would drive myself crazy with overwhelming thoughts of rejection and what that meant for my romantic prospects moving forward (of course, I would have none…ever).

Or I would be dating someone who was clearly NOT someone I should be around, but because black and white thinking means you refuse to acknowledge that reality exists in shades of gray and nuance, I’d stick around far too long.

You overlook flaws in order to amplify good traits so they can fit neatly into the space you’ve carved out for them. And besides, to admit that this person is wrong is additional verification that you are a lonely, miserable prick who will never be happy.

And until very recently, I had no idea that most people are not plagued 24-7 by emotionally overreactive thought patterns.

I mean, in a way it’s everywhere! Emotionally charged words like ‘best, worst, never, always, perfect, disaster’ are used constantly in advertisements and headlines to grab our attention and make us feel a certain way.

These words tap into an innate desire to categorize things quickly and then react.

But seeing the world in only absolute terms is actually really unhealthy and once we notice that we’re guilty of doing it, it’s time to go to work.

Because the alternative is often desperate attempts to numb it all away. I used to try to quiet the storm with alcohol and that only made things worse.

Luckily, there is something we can do about it.

No, it’s not some designer drug (this is a sobriety blog after all). I’m talking about cognitive behavioral therapy. And you don’t need to fork out tons of money to start working on this stuff if you don’t want to. There are a bevy of resources available to you now.

The one I highly recommend is Feeling Good: The New Mood Therapy by David Burns

. It has helped me a lot, especially when I was overseas and didn’t have affordable access to CBT therapy.

There are also a lot of really great exercises and tips online to help you deal with black and white thinking and start changing your thought patterns.

You’ll hear this one a lot if you go looking online. A great way to challenge black and white thinking is to catch yourself in the middle of one of these thought patterns and ask yourself, “Is it true?”

Are you really the worst parent in the world? I doubt it. What’s more accurate? “I made a mistake today and it feels awful, but I know I’ve a loving parent who will do what is necessary to make it right.”

If you catch yourself saying extreme things about yourself or someone else, stop and ask yourself if it’s really true and then allow your brain to explore the more accurate grey, nuanced reality of the situation.

Basically polarizing words. Search for the grayer equivalent. Instead of saying, “I’m so stupid!” change it to, “I make silly mistakes sometimes.” You’re not exhausted, you’re a bit sleepy. You’re not dying, you worked really hard and now you’re tired.

This might seem kind of silly to you at first. We often use polarizing terms for comedic effect. But defaulting to the most polarizing, exaggerated version of what you’re trying to say matters.

But again, using dichotomous language boosts dichotomous thinking, and the latter is a type of cognitive distortion that can negatively influence the way you feel about yourself. If you’re dealing with anxiety, casual usage of extremely polar words can lead you to magnify thoughts and events through a distorted lens that can ultimately make you more anxious.

A journaling practice and certain writing activities can be helpful as well. Write down the black and white thought patterns you catch yourself having. Then refute it on paper. Think through it.

Here’s an example: You catch yourself frequently thinking you’ll never be successful.

Is that really true? Write out what’s really happening. “I’m struggling with getting started. I don’t know how to do XYZ. If I do some research, I can learn X. Maybe if I reach out to Person Y, I can move past this hurdle.”

Another example might be: “If I’m not eating healthy meals three times per day, my diet has failed.”

That can’t be right. How about this instead, “I ate three doughnuts and don’t feel great right now. It doesn’t make me a bad person. It doesn’t mean my desire to eat healthy is ruined. I’ll make sure to have a healthier dinner and avoid the free doughnuts next Friday.”

You’re essentially working out on paper the ways your black and white thinking is illogical and then creating a more reasonable counter-narrative.

It takes a long time to automate more reasonable thoughts. And sometimes it feels kind of silly or annoying to constantly have to interrupt your thoughts and challenge them. Almost like you don’t know how to function.

But give it time, and again, challenge whatever all or nothing beliefs you have about this process as well. Some days you’ll be good and consistent about it, other days you won’t. And those less successful days in no way define you. They aren’t evidence that you can’t do this.

You’re human. And this is what the human experience is really like.

Of course if you are REALLY struggling with black and white thinking, you should seek treatment with a licensed therapist. It can be a sign of a more serious mental health problem. They’ll be able to provide you a tailored treatment plan.

And, as always, be kind to yourself. 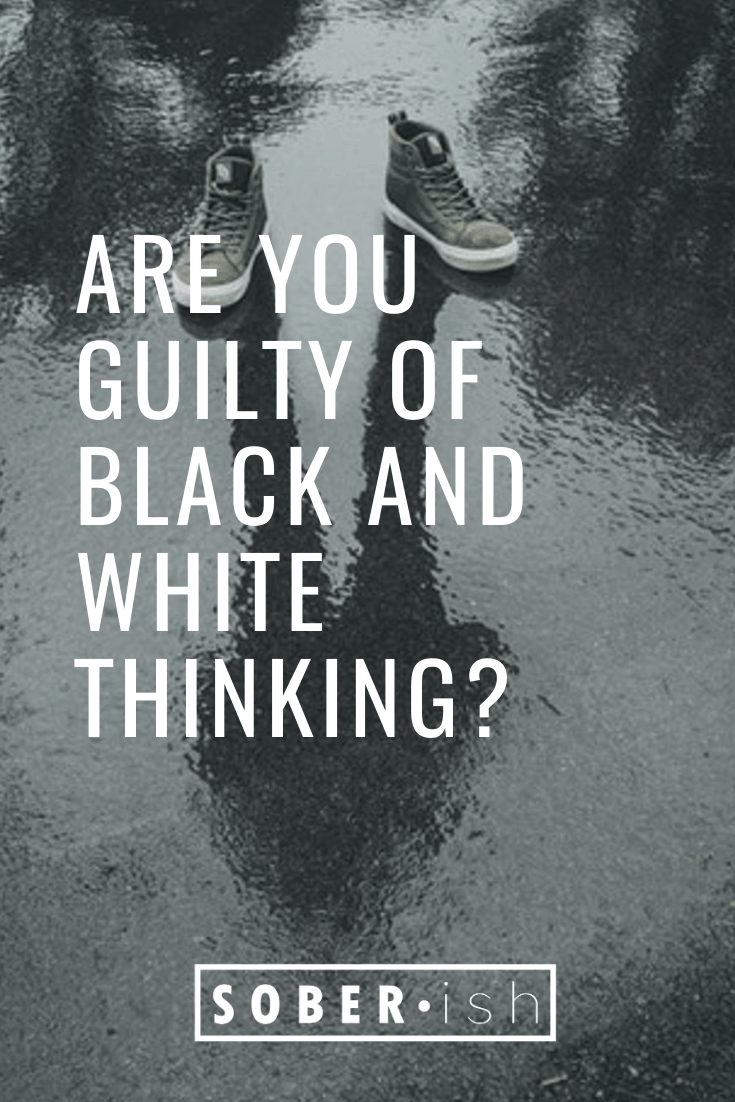 Anxiety: What It is, What It isn’t, and 9 Surprising Causes You Should Know