Last week I seriously thought about quitting my sobriety.

I honestly cannot recall the last time my sobriety was so shaken for a sustained period of time. Sure, my daughter’s toddler meltdowns have occasionally made me flirt with the idea, but not seriously.

It was how I articulated my stress about parenting.

“Man, this is a horrible time to be sober!” Chuckle. Wink. But I was never going to actually do it.

There has been so much building up to last week. I’ve been in and out of doctors’ offices for six years now trying to find a reason for the recurring inflammation in my eyes. For whatever reason, the effects of that inflammation have become increasingly worse in the last few months.

I sometimes find it difficult to read my computer screen. The slightest hint of natural light sends an army of black dots scurrying across my vision. Other times, it’s like trying to look through a dirty window.

Then there’s the other stuff – things I’ve determined to be normal because I’ve had them for so long.

I’m constantly fatigued. My digestive health leaves much to be desired and I can’t be outside in the sun for longer than an hour without needing a nap.

When I wake up most mornings, my body feels like it has been curled into a tight ball the entire night. Maybe it has.  It doesn’t really matter if I sleep for nine hours or six. I will be tired in the morning.

I drink over a gallon of water every day, but can never seem to quench my thirst. I’ve been tested for diabetes, thyroid problems, and celiacs.

The tests come back normal. So I’ve learned to live with it.

Then the brain fog hit. 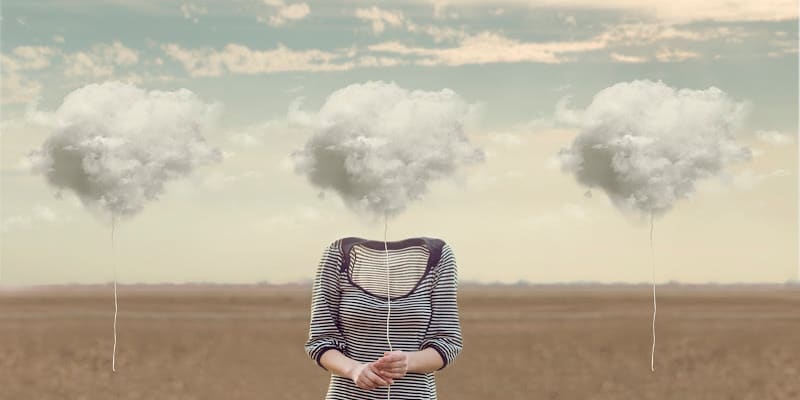 I forget things I should not. Sometimes goofy things like why I opened the refrigerator door. Sometimes, not-so-funny things like, “Did I just take my medicine?”

Storing new information has felt like a Herculean effort. I began to distrust myself. Was I really told X or is this person messing with me?

My new job, which I initially loved, became impossible. I was dropping balls and incapable of creating a system to combat whatever was going on in my brain. The harder I tried, the worse it got.

I literally could not see my mistakes (my role required extensive editing), and I became so exhausted from straining, checking, and rechecking, that my brain felt like it had dissolved to mush by midafternoon.

The litany of reprimands, edit requests, and negative feedback wore me down to the point where the second I opened my work laptop, my heart rate would go up and I would draw a blank.

There was little left of me available to my husband and daughter. Her behavior deteriorated in lockstep with my well-being. She no longer went to bed easily and regressed on potty training.

My husband knew I was struggling and absorbed as much of the parenting as possible, but it was wearing him down, too.

Then I saw my job posted on Indeed. Well shit. I knew I wasn’t going to be able to open that laptop for much longer.

I resigned four days later, and then my lab results came back.

All that health stuff I’d been battling that seemed to be getting worse and rendering me kind of useless?

Last week, I got a name for it: Sjogren’s Syndrome.

A day after I quit my job, I received my official diagnosis. I have this hard-to-pronounce autoimmune disorder that explains everything but also feels like a gut-punch.

Receiving official confirmation that I have a chronic illness in the midst of a global pandemic that half of my countrymen have decided not to care about is jarring.

It kind of hit me all at once.

I’m unemployed, newly diagnosed with a chronic disease that directly impacts my immune system (during a pandemic), and the thought of what happens after I get my last check if my husband still hasn’t locked down work is, well, terrifying.

And that made me want to drink.

I felt that desire to escape with an intensity I have not experienced since after my daughter was born when I was trapped in a postpartum, sleep-deprived tailspin.

But losing my sobriety is not an option.

To a large extent neither is seeking comfort in my other guilty pleasures: sugary drinks, carbs, fried foods. I have to overhaul my entire diet and lifestyle to get this disease under control.

So there will be no alcohol, no McDonald’s, no Big Gulps of Coke.

That’s the kicker though, isn’t it?

How much of our drinking or other high-risk behavior is a rejection of ourselves and our bodies? To be anywhere but here, when our reality is unbearable?

I’ve been reading and learning about trauma lately and its impact on the body. It started with a deep dive into a brilliant book, The Body Keeps The Score, by Bessel van der Kolk, M.D.

In his book, Dr. van der Kolk presents scientific evidence of how trauma literally reshapes our brains and bodies. It’s a fascinating exploration of the interconnectedness of trauma, mental health, physical health, and disease.

Additionally, I’ve learned there is evidence that people who suffer from PTSD and childhood trauma are at a higher risk for developing an autoimmune disease later in life.

There’s a powerful excerpt from The Body Keeps The Score

that talks about the importance of “befriending the body” in order to fully heal from our trauma.

“Trauma victims cannot recover until they become familiar with and befriend the sensations in their bodies. Being frightened means that you live in a body that is always on guard. Angry people live in angry bodies. The bodies of child-abuse victims are tense and defensive until they find a way to relax and feel safe. In order to change, people need to become aware of their sensations and the way that their bodies interact with the world around them. Physical self-awareness is the first step in releasing the tyranny of the past.”

This is precisely the kind of thing I’ve been avoiding, even years into my sobriety. I’ve always found a way to escape.

In recent years, it’s been through sugar and food – anything to distract from discomfort and overwhelm.

Is that why I got sick?

Have decades of inhabiting a fearful, anxious body that I tried to disconnect from with alcohol and high-drama relationships finally caught up to me?

Is this my body’s way of saying, “Ok, are you listening now?”

Either way, I’m taking it seriously.

That last part is my doctor’s advice verbatim.

“Alicia, you have to take it seriously.”

He wasn’t impressed that I’ve been so casual about taking my supplements and managing my stress levels.

I haven’t skipped a single tablet, am cleaning up my diet, and exploring trauma-informed yoga, which focuses on helping traumatized people connect with their bodies in a healing way.

It is a specific type of practice, a modified Hatha style, that is designed specifically to assist with mind-body disconnect.

I realize now that you cannot heal the mind without fully healing the body.

Each week, I attend online counseling sessions with a kickass therapist who knows her stuff and helps me work through, well, everything.

More on my online counseling –> HERE.

I’m eating well and remembering to take the supplements my doctor prescribed.

But I still wrestle with near debilitating levels of stress, anxiety, and depression. I struggle with touch. I’m constantly exhausted and have to guzzle caffeine to keep my eyes open, which in turn, revs up the anxiety further.

Frequently, I will stop and realize how tense my body feels, that my heart rate is elevated, and my breathing labored. But what’s wrong? I don’t have the faintest idea.

My body and I need to be a team if we’re going to get through this.

And if I’m getting through this, drinking alcohol again is not an option.

There was a time in my past when my reaction to every crisis was, “Well, I deserve to drink.”

That quickly morphed into, “Well, I’m such a f*ck up so I might as well drink again.”

Occasionally, it manifested as, “I’ve got bad news about X so I will drink, even though that will make the problem worse.”

I can’t live in that kind of headspace anymore.

The response to learning that your mind, body, or physical wellbeing is threatened should not be to endanger it further, and yet for so many of us, that is exactly what we do.

Although I may have a lot of work to do to connect with my body, I no longer want to damage it. We’re not enemies like before.

I don’t know what happens next.

For the sake of my health and sanity, I’m back to my ODAAT mindset (one day at a time).

What can my husband and I do today to ensure we can keep a roof over our family’s heads, feed ourselves, and keep our daughter in school?

I’m job hunting for something low-stress and doing Shipt in the meantime. My husband is grinding away daily on the job hunt and we have the support of my mom and her partner who have been nothing short of amazing.

Sometimes you have to decide to see things differently.

This entire diagnosis is a blessing in many ways. Now I know. I have an answer for why these things have been going on and a clearer path forward to better health.

Even though I may not be able to contribute to the high-stakes grind of agency work, it’s not a reflection of my value as a human being.

I’m meant for other things.

And that’s what I have to remind myself even now, approaching four years of sobriety. We are never going to escape the bad stuff. The world could care less about our past trauma. It still flings it shit.

But we can stay sober and we can keep trying to love ourselves through it. 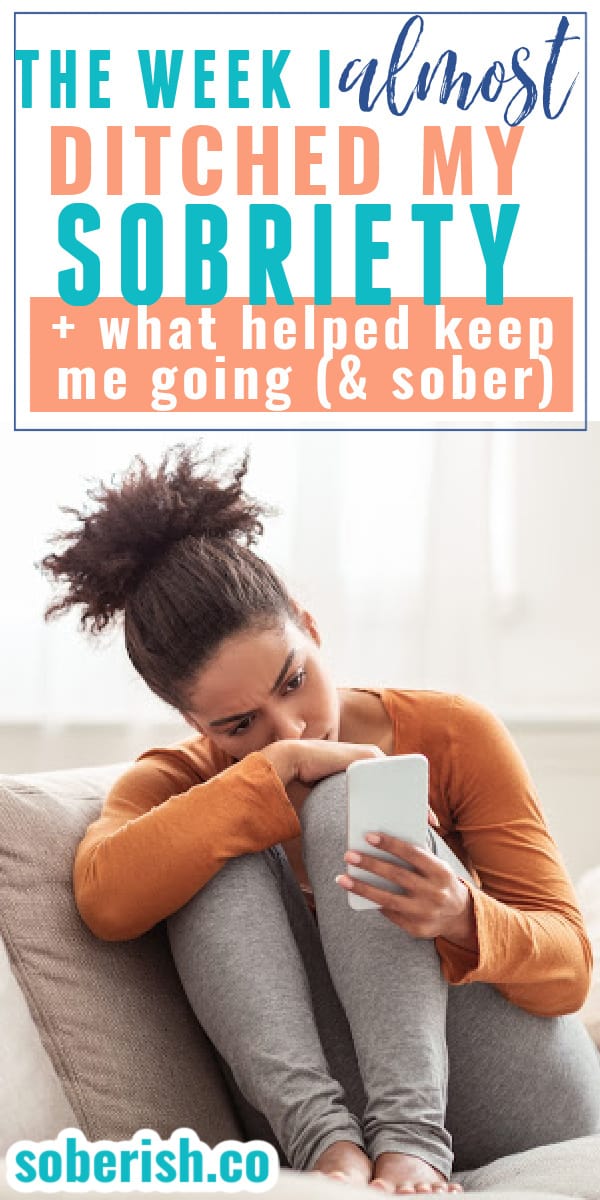 Why Remembering the Good Times is Bad For Your Sobriety

Emotional Sobriety: What It Is & Why It Matters For Your Recovery