What to do when your people don’t support your sobriety.

You’ve been at this no drinking thing for a couple of days now and the weekend is approaching. It’s highly likely that you are going to be hit with some temptation, which we discussed yesterday. (If you missed it, I recommend going back to read How To Avoid Triggers In Early Sobriety).

My goal is to help you navigate this potentially rocky terrain as best I can. I don’t have any solutions for avoiding temptations altogether that don’t involve running away to live a life of isolation in the middle of the tundra.

So really, the only choice is to confront this thing head on.

Figure Out Why You’re Not Getting Support For Your Sobriety

If you haven’t noticed by now, I’m a big fan of identifying the underlying causes of things in order to determine how to move forward. I strongly believe that being curious about problems is the key to solving them.

So whether it’s your best friend, your mama, or your partner, it’s important to understand why this conflict exists in the first place.

I’m going to break down several possibilities, but only you truly know your relationship and can determine what’s going on. My purpose is to get you to start thinking about these reasons and offering you solutions to manage them.

I’m going to ask a series of questions and if it sounds like a YES for you, keep on reading that section. If not, you’re welcome to skip ahead.

1. Is this person a drinking buddy or part of your drinking crew?

If the answer is yes, then it should be fairly obvious why he or she is not thrilled that you’ve decided to lose the booze for at least the month of January, if not longterm. But what’s really driving that?

Some people like to drink completely alone, and others like to have a binge buddy – someone who makes them feel like their behavior is okay (even though it’s not).

You’re potentially taking that away from someone.

By saying, “I’m not drinking,” you’re signaling that there is something wrong with how you’ve been drinking up to this point.

The people in your life who haven’t reached that conclusion are going to resist that and the resistance can come in many forms. Maybe you’re getting harangued by them, or pressured, or joked about.

Their behavior is not REALLY about you and the worst thing you can do right now is internalize it. You’re doing a good thing for yourself right now.

Keep your focus on that.

Related Post: How To Get People On Board With Your Sobriety

So how do you manage the pressure from drinking buddies?

“So what’re you gonna do for fun?”

“Come on, Saturday brunch won’t be the same without you!”

“Okay, but we’re all drinking. You’re going to make us feel bad!”

None of these things are your problems to fix.

People who support your sobriety are not going to try to pressure you to drink. People who don’t will go to great lengths to get you to start drinking again.

If you’re getting pressure, it’s not necessarily because they don’t care about you or want you to live your best life. It’s likely that THEY aren’t ready to change.

They want you to stay with them, rolling around in the proverbial muck. Or maybe this is a wake-up call for you to see that this isn’t a good person to have in your life.

You may have to set this friendship aside for a little while, and if it means your biggest support comes from AA meetings or group counseling, or a new fitness class you’re joining, then that’s okay. Maybe your friends will come around, and maybe you will all move on with your lives separately.

Either way, you will be okay. I promise.

2. Is the person your spouse or significant other who still drinks heavily?

When a friend doesn’t support your sobriety or goals, it’s hard. When it’s a spouse or significant other, it can feel damn near impossible. The root cause of their resistance to your sobriety likely comes from a similar place.

Or maybe it’s something else entirely.

A supportive partner who doesn’t have an unhealthy relationship with alcohol is going to be able to abstain from drinking around you if that’s what you need. But a partner for whom drinking is still a major part of their life might not be able to.

Here’s my advice on what to do:

No matter what your partner is doing at home, you have to focus on the things you can control right now, which is you and whether or not you’re going to drink. Make this a priority.

You can’t do this alone, especially if you have somebody important in your life who is still drinking heavily and not giving you the support you need. Go to an AA meeting, attend group counseling, attend Al-Anon support meetings (for family members of alcoholics), or find a sober Meet Up.

Lean on friends and family who DO support you. Join the Soberish Facebook Group. Find people who can lift you up.

Don’t let your partner drag you down with them.

This is the hardest one. Be supportive of your spouse if they are going through some major challenges with alcohol. DO NOT let them drag you back into problematic drinking. Support them and get them to consider some counseling or treatment. If they continue to get worse, you may have to leave them.

I know that last part is heavy, and you will cross that bridge when you come to it. For now, focus on YOU and building a new, stronger foundation and community.

4. Have you let this person down in the past?

Sometimes a lack of support is partially (or completely) our own fault.

Have you promised this loved one several times in the past that you were going to stop drinking, only to relapse and go back to heavy drinking? Have you made grand announcements of how you were going to change this or that only to give up shortly thereafter?

To be frank: Is this person tired of your shit?

I ask this lovingly as someone who’s “shit” MANY folks have been tired of in the past. I do not begrudge anyone for deciding a relationship with me was not in their best interest.

If you’re known for making promises you don’t keep, you need to be patient with your loved ones and prove to them that you’re serious this time.

The WORST thing you can do right now is to try to put too much stock in the support of people whom you have let down in the past and then play the victim when you don’t get it.

If that sounds harsh, it’s because it is and you need to hear it. I needed to heart it.

Do NOT play “woe is me, nobody thinks I can do this, I’m just going to quit.”

Your cycle of failure will be endless unless you learn to take some responsibility. You might have to build support systems outside of your friends and family at first.

Do whatever you have to do.

Go to places where people know what you’re going through. Go to AA meetings, join online groups (Facebook or elsewhere), see a counselor.

There are thousands of us out there in the world: people who have let everyone down and know what it’s like to be trying to do better for the 100th time without anyone believing they can do it.

We will have your back until you can win back the trust of your loved ones.

5. Does this person just not get it?

Sometimes it’s the case where people don’t know how to react to something like hearing you’ve given up booze.

It’s a weird, awkward conversation. Why is that?

The stigma around addiction is still difficult or strange for a lot of people. For others, alcohol is such a common part of everyday life, you might as well have told them you’re giving up water or bathing.

It’s not that this person doesn’t support you or is trying to sabotage your goals. It’s more that they are indifferent or don’t know how to react to you at all.

Figure out why. Talk to them.

Is it that they don’t understand how alcohol can be problematic for someone? Are you not known to be a big drinker to begin with so why would you bother to give it up?

Is giving up alcohol for thirty days (or longer) silly to them?

Whatever the case may be, get to the root of it.

It might not be that serious for them, and it’s okay. Don’t make it awkward. Just be confident in your reasons for not drinking and explicit in what you need from them.

Chances are, you’ll get it, but only after you ask.

Sometimes it’s the case that a person isn’t intentionally being unsupportive. It’s just that we haven’t been clear with them about what we need.

Check to see if that’s the case before jumping to conclusions about whether or not this person is supportive of your sobriety.

Change is hard. Sobriety is hard.

You’re doing a really powerful thing right now and in a perfect world, you would have all the support you deserve. But if you don’t, just remember that there are a lot of us out here who understand what you’re going through and can fill in the gaps that are opening up in your life.

Some people will come around, and others may drift away, but you will come out on the other side a better, happier version of yourself.

Here are some writing prompts to help you process today’s topic. 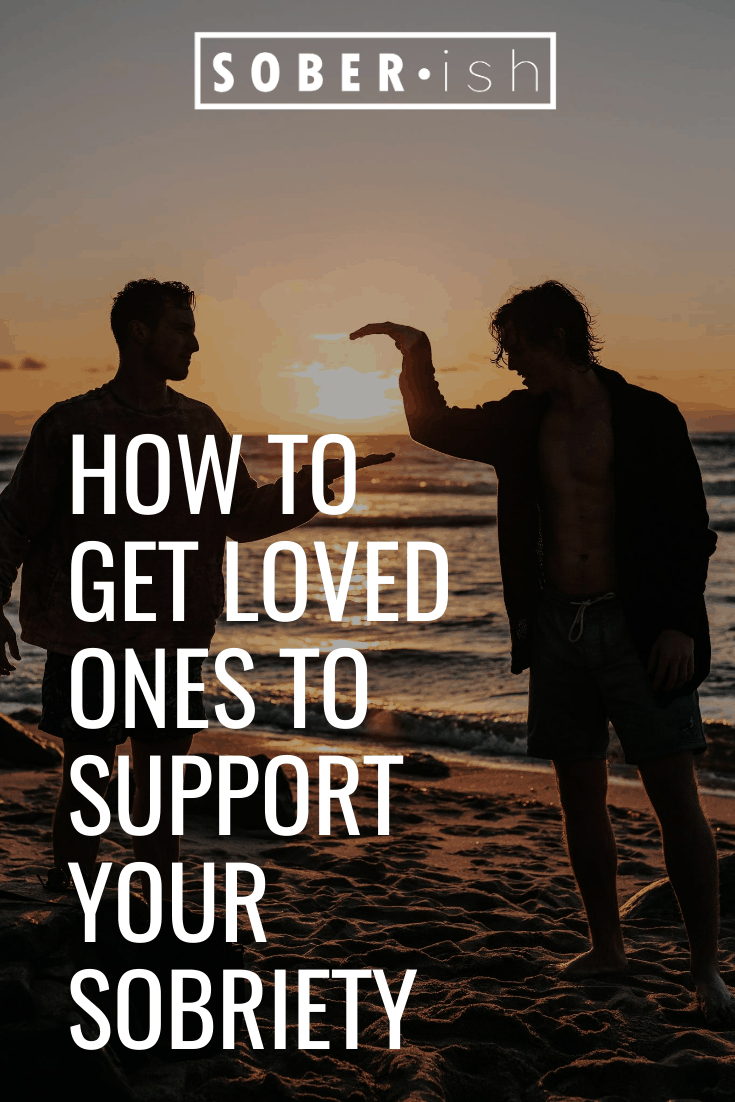