How I’d Get Sober Differently

I recently celebrated three years of sobriety and could not be more grateful. I have a deliciously, somewhat boring life, an adorable daughter, a loving husband, and I have never felt so happy or stable.

But it’s not because I did recovery perfectly. In fact, I’ve made a lot of mistakes and unforced errors along the way, some of which I STILL contend with. (Eh-hem, sugar!)

So I was thinking that if I had to do it again, what would I change? What would make my recovery even better?

Here’s a list of seven things I came up with.

1. I would not allow the sugar consumption to get out of hand.

I know that in the early days, you gotta do what you gotta do. If it’s between a cookie and drinking, obviously take the cookie.

That being said, it is incredibly easy to take that mindset too far. We quit drinking and start looking for other ways to be “bad.”

I quit drinking, so I can eat whatever I want!

Early sobriety is filled with uncomfortable emotions and situations. Sometimes we stuff our face to tamp down the noise.

It’s not surprising that we opt for sweets.

On a chemical level, sugar has a similar effect on the brain as alcohol and narcotics. When we ingest sugar, the level of dopamine in the brain surges.

Because our brains are a little behind the times evolutionarily speaking. We are hardwired to seek high calorie foods because that’s what helped our more primitive ancestors survive. The brain rewards us for indulging with happy chemicals so we’ll eat more of the same.

The problem is, we don’t live in hunter-gatherer societies anymore where scarcity is a concern. So there’s that.

For those of us who abuse alcohol, sugar cravings can be particularly problematic.

Alcohol has a lot of sugar in it that our bodies become accustomed to from our daily or near daily drinking. So when we give up alcohol, our brains think, “Holy shit! Where is the sugar?!!!”

We also miss the sweet dopamine rush that alcohol gave us and look for the next best thing: sugar! It’s why so many people can’t stop stuffing their faces with donuts and sweets in the beginning. (Guilty!)

You do what you gotta do.

But you have to be careful.

You do NOT want to let the sugar consumption get out of hand. I did and I am STILL paying the price. My weight has become a problem, specifically the dangerous visceral fat that comes with too much sugar and stress.

And the sugar addiction? It’s real.

In fact, in the first 72 hours of recently trying to eliminate all refined sugar from my diet, I experienced intense physical and emotional withdrawals that felt 100x worse than when I quit alcohol and cigarettes.

I’m talking debilitating migraines, elevated anxiety, an inability to think clearly, and a general desire to hide under a blanket for the foreseeable.

More on getting off sugar in a future article. For now, let’s move on!

I didn’t go to AA when I first got sober for a few reasons.

There’s so much more to sobriety than not drinking alcohol. Things you have to face head on. Problems you have to solve. Mistakes you need to own up to.

I think I would’ve benefitted from that work, especially under the guidance of a sponsor. Which is not to say I still can’t benefit.

And that’s why I think I’ll start going now that I’m back in a place with multiple AA options and nothing but my own silly excuses holding me back.

3. I’d spend more time getting my gut health in order.

Heavy drinking and smoking does so much damage to our digestive system. Here’s a breakdown of some key problems alcohol can cause in the stomach from the fine folks over at Alcohol Think Again:

Years of abusing your digestive system certainly takes its toll and, unfortunately, does not get reversed by eating McDonald’s and Krispy Kreme.

You have to make a conscientious effort the heal the damage through dietary and lifestyle changes. Now, I was pregnant the first nine months of my sobriety so my entire body was in upheaval. Not much I could’ve done then, especially since I suffered from intense hyperemesis.

HOWEVER, I didn’t exactly make it a priority after my daughter was born and may or may not have survived off peanut butter and jelly, Doritos, and Coke.

Take care of your tummies!

In addition to not feeling like a bloated, gassy, sluggish pile of sober bleh, there is a lot of research that shows a direct connection between our gut health and our mental health. In fact, our gut is sometimes referred to as our “second brain.”

It’s why we get butterflies in our belly when we feel nervous or puke after a life-changing audition on America’s Got Talent.

There is also a lot of convincing research that suggests a correlation between the depletion of certain gut bacteria and anxiety and depression. Which, let’s face it, a lot of us also struggle with.

So instead of shoveling fried food in my face every time parenting got overbearing (so every day, basically), I’d have made a better effort to get more fiber, eat more leafy greens, and make sure I had a steady source of probiotics in my diet.

If this topic interests you, here are some book titles you may wish to check out on amazon:

People who abuse alcohol for extended periods of time often have vitamin deficiencies. We do. And honestly, popping a couple of gummy multivitamins a day isn’t a big strain on the ole routine, if you know what I’m saying.

Go to your doctor after you have some sustained sober days under your belt and see if you’re deficient in anything. In fact, tell you doctor what’s up.

You used to drink like a frat boy and now you don’t. How’s my body, doc?

My vitamin D levels were extremely low and I needed to take a specific amount of supplements on a particular schedule to get back to normal.

So what I’m saying is, don’t go google “which vitamins are alcoholics deficient in” and then head to GNC or Boots to sort it out on your own.

See you doctor and then take your vitamins!

5. I’d change my approach to exercise.

Are you as susceptible to buying Instagram fitness models’ 8 week programs as me? I am a SUCKER for those things and honestly, I haven’t enjoyed a single one.

Exercise is critically important in sobriety (and life). But you don’t have to hate it. I kind of imagined that I needed to be living some CrossFit training montage every day of my life for it to be worth my time.

That’s not the case.

(By the way I LOVE CrossFit, but purely as a spectator.)

Move your body in ways that are enjoyable for you. If going for walks every morning or evening and hitting your step goal makes you happy, go do that.

If water aerobics gets the endorphins going, then by all means!

I have a long history of starting things I never finish because I realize that I’m don’t actually enjoy them and then I just give up because I feel like a big ole loser who can’t stick to anything.

These days, I do things I like. I go to the gym and lift weights and I play pickleball with the fine over 60 crowd in Southwest Florida for cardio.

Exercise isn’t meant to stress you out. But that’s what it was doing for me, so I stopped forcing myself to do programs I don’t like.

Seems obvious, but a lot of people give up on fitness because they’ve picked something they actually hate doing and rather than change it up, they decide they just “can’t do it” and go on being miserable.

6. I’d be more disciplined about my diet.

There’s such a delicate balance we have to strike in sobriety. In the early days, we have to prioritize sobriety above all else.

Don’t try fix it all at once. One day at a time. And all that.

But eventually you get to a point where it’s time to level up and work on the other stuff. I don’t know about you, but I was pretty good at delaying that as much as possible.

If I had to do it over, once I reached the two month mark, I’d have done more to get my diet right. Now I don’t mean that in the “hey I’m on a diet” sense of the word.

It’s more of, “What foods have I been neglecting and what do I need to incorporate into my diet to start fixing all this damage and feel better?”

Early sobriety is such a wonderful opportunity to rebuild from scratch. I WISH I had focused more on the whole shebang and not just the “don’t drink” part for as long as I did.

Have some tea instead of sugary drinks. Eat a salad. Avoid the overly processed stuff.

I didn’t prioritize that soon enough and I ended up building some horrendous habits that I now have to go back and undo.

Set yourself up for success.

Start building those healthy habits piece by piece as you work through the first year of sobriety so you don’t wind up one or two years sober with a raging sugar addiction.

7. I’d talk to other alcoholics.

This probably goes back to the whole attending AA thing, but in my early days, I was an island. Of course, I had the extenuating circumstance of trying to navigate a difficult first pregnancy and that took up a lot of real estate in my brain.

But I really struggled and I’m not sure how much of that was pregnancy hormones and how much could be attributed to the emotional trauma of getting sober after years of heavy drinking and alcohol abuse.

I tried to talk to my husband about it, but he never really knew what to say.

I should’ve reached out more. In the early days, I did engage with my beloved #recoveryposse on Twitter and to this day I get a lot of encouragement and love from them.

But it’s too easy to disconnect from an online tribe and that’s what I ended up doing. Tried to go it alone and the process was lonelier and more isolating because of that.

So my advice then is to talk to people, even if you’re being a miserable prick. Keep showing up to your community and lean on them for support.

Sobriety is an imperfect process.

And it’s not linear. Kind of like weight loss. Most of us will slip up, backslide, have incredible breakthroughs, plateau, and then do it all again along the way.

There’s no “right” way to recover.

But I hope in reflecting back on how I would approach it differently, you might get some insight into what you can consider tackling early on so as to avoid similar problems.

And, as always, if you’re looking for a community of like-minded people who will hear you out, hop on over to our private Facebook group. We’d love to have you. 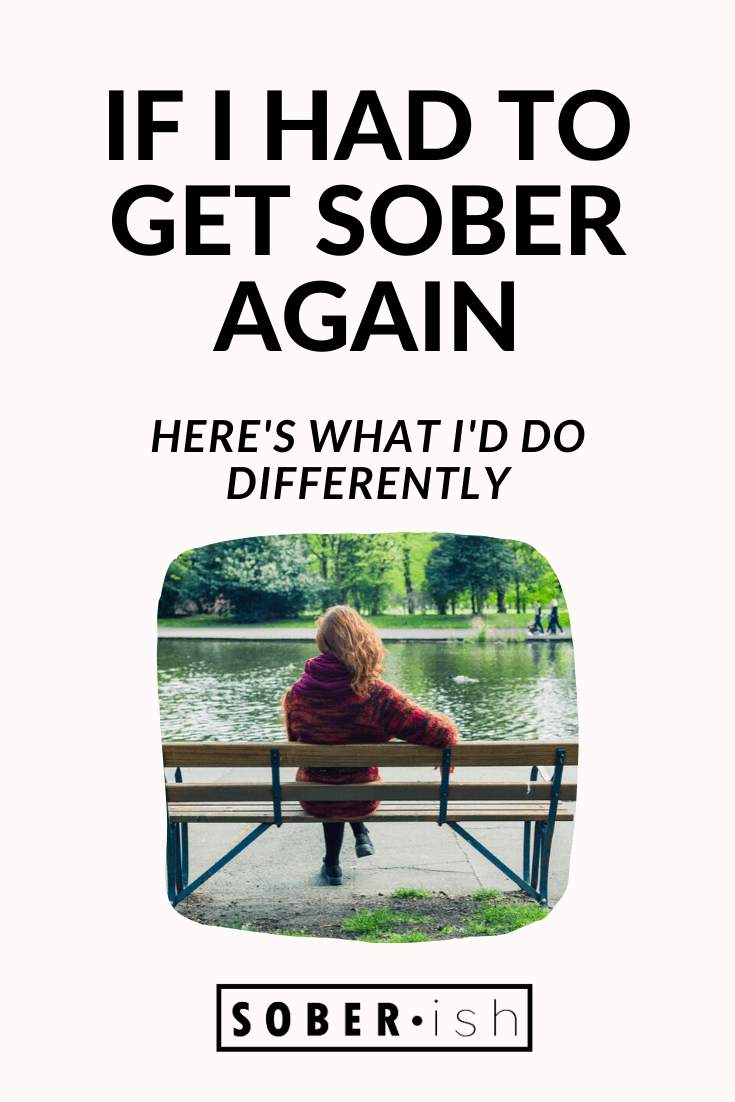