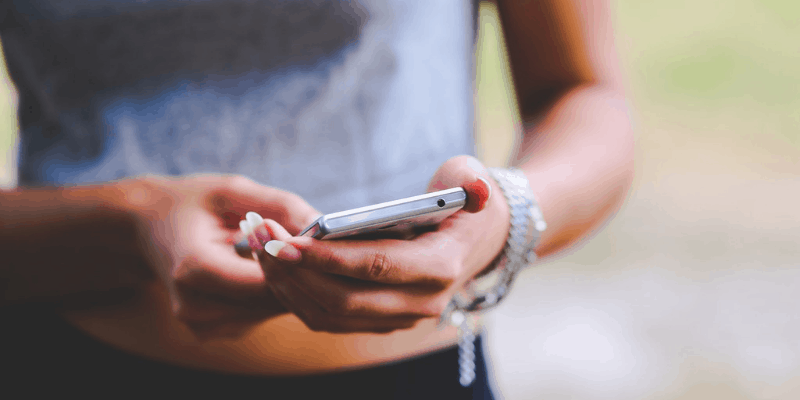 I recently sat down to read a fabulous article in The Atlantic profiling a guy named Tristan Harris who is making it his life’s work to design and encourage other companies to create more ethical software that will help break the increasingly vicious cycle of technology addiction in our lives.

The article caught my eye because I’ve been feeling increasingly bothered by the amount of time I spend reaching for my phone. I easily get lost in the abyss, wasting hours of time perusing through social media, usually mindlessly.

I’ve come close to installing phone use apps like BreakFree or Moment to see just how bad I’ve gotten, but I have yet to bring myself to do it. I know it will not be good news and I’m not sure I’m ready to commit to another major life overhaul. That’s ridiculous fear-talk and excuse making right there folks.

Feeling Glued To Our Technology

Can you imagine for a moment?

I know I have a problem, that I am on my phone way too much. It eats away at my energy for other, clearly more productive tasks. I catch myself grabbing the phone for no reason other than pure habit.

I’ve read books and articles from very intelligent people waving red flags in my face imploring me to wake up and get a grip on my screen time. It’s become such an epidemic that they are creating apps FOR our phones to save us FROM our phones.

Yet, I don’t take that next big step to use an app that will lock my social media apps if I spend too much time on them because I’m not 100% ready to face down this demon. Sound familiar?

The Selfie Craze (And YES, It Is Crazy)

A lot of attention is given to the impact of social media on teens and younger people that I don’t necessarily relate to, but that frightens me nonetheless. Actually, let me revise that. I do see people my own age falling victim to the same trappings.

There’s the search for the perfect selfie, which has people taking literally hundreds of selfies a day for social media. Sure, we laugh about the Instagram boyfriend lying across a public sidewalk to snap a photo of his partner at just the right angle. We should laugh because it’s ridiculous. It’s also extremely sad and telling. The quest for a great selfie is so bad now that people are actually dying in order to get the perfect shot.

I do not take selfies except on the rarest of occasions (read: new hair cut or actually wearing makeup without looking clownish). I have gone out to dinner and watched my fellow diners stop mid conversation to take a duck faced selfie (or two or three or four) and then carryon as if this is normal behavior (because I guess it is now).

There are people out there who would rather let their food get cold than eat it before capturing the BEST picture to share on the Gram.

I USED to be very guilty of this. It wasn’t necessarily a selfie, but it could be a post or something else that I desperately wanted to get likes for. The majority of us are guilty of hopping online for affirmation in one form or another.

How Bad Could It Be?

There are signs everywhere that our technology consumption is getting out of hand.

I read about teenagers who are so obsessed with their Snap streaks on Snapchat that if they go away on vacation with their families, they give their friends their login info to snap on their behalf. There is an entire social stratification happening in the lives of teens that revolve around these Snap streaks. If you don’t know (because I certainly didn’t), a Snap streak is when you send direct snaps back and forth with a friend for consecutive days.

Think about just how much of our real lives have transferred online. How much of our own self-worth is linked to our networks, likes, shares, and number of direct messages?

It’s so commonplace that we hardly recognize how plugged in we’ve become. We try to create the perfect life online. We want to appear fulfilled, carefree, and living some “authentic” experience.

It’s all smoke and mirrors, but we still participate. We expel our energy every day by trying to function simultaneously in reality and online. When I look around and see the vast majority of people glued to their screens to the point where they do not even watch where they are going, I have to think that we are failing.

I do not want to suggest that I am somehow immune or outside of this issue. I am certainly not. I’ve had some horrible habits in the past that I still dabble in.

Whereas these days I don’t generally participate in the popularity politics of social media, I do have a very niche vice that consumes way too many hours and minutes of my day: news and current events.

Nerd alert, I know, but it’s no less nefarious in its impact on my life and well-being.

Although I don’t do it anymore, the first thing I used to check in the mornings were the ole Twitter and Facebook just to get political news. Because I live in a time zone eight hours ahead of the East Coast in the United States, usually things happen while I’m asleep and my first instinct was to catch up.

This process took upwards to 25 minutes that I could have spent writing or meditating. Anything would have been a better start to my day. The pull to see what’s going on in the world almost always won. It was political FOMO.

Once I get home, I turned on the news and, you guessed it, was back on my phone. I enjoyed engaging in real time with whatever breaking report was flashing across my television screen.

Despite the fact that the news cycle is essentially a very longwinded 24-hour discussion of the exact same three topics, I stayed plugged in. I did not want to miss another insane revelation in US politics. I wanted to read the thought pieces and comment on friends’ Facebook posts who engaged in the same topics.

Internet Culture & My Own Mental Health

What’s so bad about that? It is my duty, after all, to be an informed citizen. That’s true, but it didn’t feel productive or healthy.

I’m not a political pundit nor do I aspire to be. I don’t work in politics at all. I don’t write about politics (generally) and I’m not a thought leader in any online space for these topics.

What am I doing with this information besides driving myself crazy? (If you follow American politics for even a day, you can see how it would trigger anxiety).

It’s a soap opera that never goes off the air. I’m like the loony wife in Fahrenheit 457 who spends all her time consumed in the never-ending saga of The Family. In my case, The Family is an over-saturation of Twitter threads and podcasts.

In that way, I am not very different from the teenagers who can’t stay off Snap and outsource their social media upkeep while away on vacation. I’m just like the ever-scrolling thirty-somethings checking to see who went on a fabulous vacation or got married. My trap happens to be an enticing, 24/7 news bubble.

Let’s be clear. You will give yourself anxiety if you constantly subject yourself to the 24-hour news cycle. I knew this and still did it. It was a bad car wreck that I could not look away from.

Eventually, I had enough and removed the apps from my phone. Much to my chagrin, I eliminated 80% of my political pods and replaced them with more useful ones. I could not be happier with my choice.

That’s the big takeaway. If how you fill your hours ultimately is not filling you, it’s time to for a change. It’s time to unplug. 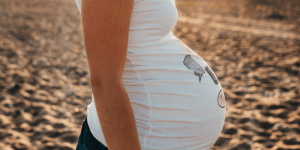 Having anxiety can feel a little like being trapped inside a very loud high school cafeteria where the chatter ranges from shrill gossip, to bullying, to random diatribes over seemingly useless topics. The noise varies in its harmfulness. There’s a mean girl in there judging everything: your looks, your attire, your personality and life choices. She reminds you of all the dumb shit you did, as any true frenemy would, and leaves you feeling suddenly mortified about a past event you thought you’d locked away forever. The bullies are there interrupting any peace you might have with random insults hurled from every direction. “Stupid bitch!” Whoa, buddy. Where did that come from? What did you do to illicit this? Nothing really. It’s just what bullies do. In the milder moments, you’re swept up in trains of thought that seem interesting and insightful, but ultimately are stealing time away. It’s incredibly exhausting to live inside a space that rarely gets quiet.

So what to do? 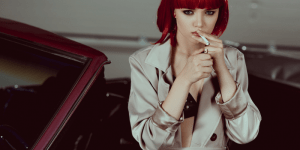 Are you tired of your own bullshit? I’m sure you’d agree that we all have our “stuff” we’re trying to handle. But some people are doing a much better job than the rest of us at breaking their bad habits.

When I first got sober, I had a lot going on (tough pregnancy) and I used it as an excuse for letting in new bad habits. Now that I’ve got a couple of years of sobriety under my belt, I’m actively working to fix it. 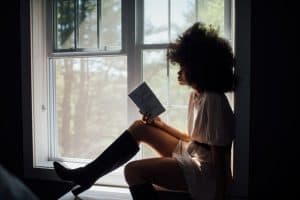 Drunk me would’ve loved a quarantine…at first. I know I’m not alone in saying that.  The old me would’ve stockpiled early on alcohol and cigarettes. Money be damned. The old… 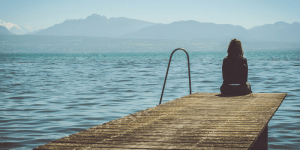 I was recently scrolling on Twitter (yes, I know) and I came across a tweet that really made me pause.

I wasn’t alone in thinking that this seemingly obvious yet easily overlooked choice was in its own way, a revolutionary act. At the time I saw it, this had been retweeted over 288,000 times. It got me thinking about all the “what ifs” that have kept me up at night, stolen my thoughts throughout the day, and kept me from pursuing things I thought could make my life better. 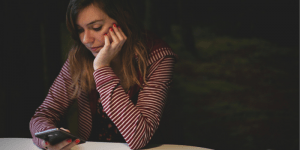 A while ago I noticed that my anxiety levels felt through the roof for no particular reason. My neck and shoulders were in a constant state of stiff or sore. I felt foggy brained and tight in the chest. Several times a day, I had to consciously tell myself to soften my jaw or remove my shoulders from my ears. I would sit down innocently enough to check something on Twitter or Facebook and lose an hour without realizing how or why. My motivation began to deplete. I wasn’t getting anything of value done and still managed to feel like I’d run a marathon at the end of the day. 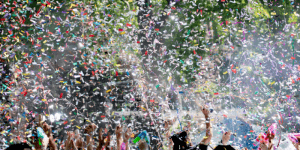 Today, I have two years of sobriety.

I’ve been thinking about what I wanted to say about this milestone, how to be helpful. Whenever someone asks me how I managed to quit drinking, I struggle a little to answer.

The Soberish shop is now live on Teepublic!