When alcohol triggers pop up to say hello

The other day, I was out with my family taking a stroll around the river district in downtown Fort Myers, Florida. It’s a quaint downtown space with bars, restaurants, and shops.

On this particular night, it was relatively calm. The streets were decorated with soft string lights and peppered with outdoor heat lamps, adding to the warm ambience of an otherwise brisk evening (for Florida, anyways).

You see the little cobblestone side streets with tables and chairs outside of bars reminded me of Rome (minus the incredible pizza and pasta options). And the last time I was in Rome, I ate, drank, and smoked my way blissfully around the eternal city.

It was around this time of year as well.

And despite the fact that our little Roman adventure was four years ago and I haven’t touched a drop of alcohol or smoked in nearly three, I caught myself thinking, and then saying out loud, “Drinking me would’ve loved this.”

And she would’ve. For about an hour and a half. Then things would’ve gotten sloppy.

A lot of sober people find the holiday season particularly triggering. And for a whole host of reasons.

There are the bad triggers and memories. Regrets of blackout drunk holiday parties. The terrible thing that was said or done.

Or maybe it’s a lonely time. Perhaps you burned all your bridges and the holidays are a glaring reminder.

Even if the holidays are happy times for you, it’s easy to fall down the rabbit hole of romanticizing festive drinking. For me, it’s always the memory of warmth. Warm food, homes, sweaters, and the deep, internal warmth of whatever alcohol spiked holiday drink is offered.

It’s the warm, fuzzy coziness that the silly part of your brain is convinced cannot be replicated without alcohol.

We cling to this false idea that celebrating means drinking. And THAT leads to a nagging feeling that you’re really doing the holidays “wrong”. You’re missing out.

Of course, that’s all nonsense…

And yet those feelings still have a way of creeping up on us, even if you haven’t had a drink in years. So it is in that spirit that I want to provide you with some counterarguments to give that sneaky little voice inside your head that tries to use the holidays as a reason to drink again.

I thought about the various triggers I’ve encountered this time of year, internal and external, that have threatened to throw me off my game and what you can tell yourself to get through it.

I mean, yes. It CAN be weird to be the only person not drinking. Even if you’ve got some years of sobriety under your belt.

But feeling a little weird is a really terrible reason to give up the sobriety you’ve fought so hard for. Reverse engineer this decision.

So that loudmouth conspirator in between your ears got the bright idea that you deserve to let loose and treat yourself at the holiday party. And for whatever reason, that means submitting to the power of the open bar and doing God knows what.

Let’s say you do it.

Here’s what’s going to happen. You’re going to feel AMAZING at first. That’s the pleasure centers lighting up in your brain. You’ll be giddy with anticipation as you make your way to the bar for the first time in months (or years).

And then the first sip. That old familiar warmth sliding down your throat. Pleasure centers light up some more. The reward-center of your brain just got flooded with dopamine, something you’ve maybe struggled to recreate in sobriety.

You’ll probably feel fan-friggin-tastic for the first drink or two. Now you’re on the dance floor whooping it up with Karen in accounting.

It’s POSSIBLE it could end there and you manage to quit while you’re ahead. You go home and delude yourself into thinking you’ve nipped this whole “drinking problem” thing in the bud. See! You CAN drink normally.

What’s MORE likely is that you’re going to go overboard.

You’ll fly right past the happily buzzed stage and tumble head first into sloppy drunk. Maybe you’ll find yourself with your head in the toilet chucking up those shrimp cocktail thingies.

Your drunk ass will likely say or do something highly embarrassing and regrettable.

The next day, you’ll wake up with a dreadful hangover and a mountain of regret. You’ll hate yourself for drinking and tell yourself a dozen reasons why you’re a hopeless person.

And then you’ll be forced to start your sobriety all over again.

Is an hour (two at the MOST) of blissful booze buzz worth all of that?

Related Post: How To Survive Your Holiday Party Sober

My first sober Christmas and New Year’s Eve were FILLED with battling this thought about fifty times a day.

The lure of the magical “last time” is a devilish thing. Where’d it come from? It’s like a bad John Mellencamp song that will never, ever come true.

Your last time drinking is going to be painfully ordinary. I mean that quite literally. You’re going to do the same dumb shit you always do when you drink and wake up the next day absolutely wrecked.

Don’t believe your own BS.

I don’t know why, but in the months leading up to my sobriety, I was constantly chasing this mythical, perfect “last drink”.

The fantasy went something like this: I’d crack open a bottle of Jack on New Year’s Eve, savor the drink one last time, have some profound whiskey-fueled epiphany, and solve world hunger…or something absurd like that.

And then, some time around 3 AM, I’d put down that glass, snub out the cigarette and proclaim, “It is done.”

And you know, no matter what, no last drink is going to ever measure up because it’s an impossible standard. Alcohol is not magical. It makes you feel good, until it doesn’t. And then you eat a burrito and wake up with a hangover.

You know what else is not magical?

We do this to ourselves every year. (I do, at least).

Here’s the thing. Statistically speaking, 92% of us are not going to keep our New Year’s resolutions. That’s because there is no special juju that washes over us on January 1st. We wake up the same people we were on December 31st.

So if you catch yourself trying to use the old “I’ll do better January 1st” as a way of screwing up throughout the month of December, give yourself a reality check.

You’re not going to have a magical night of drinking and feel miraculously satisfied, ready to take on sobriety in the new year with perfect resolve.

That’s because alcohol is not magical and neither is New Year’s. It’s just your inner conspirator looking for a convenient excuse to drink again.

Sometimes holidays are triggering for different reasons. We’re inundated with images of families and friends spending time together. Everyone seems spilling over with love and holiday cheer.

If the holidays are a painful reminder of everything you’ve lost, my heart goes out to you. I’ve known those days.

It is tempting to want to numb that pain with alcohol. But the thing is, alcohol only numbs for a little bit. Eventually, it becomes a bullhorn.

Alcohol mixed with depression or grief during the holidays is a recipe for disaster.

When you’re in the throes of sadness, depression, or loneliness, it can feel annoying to hear people say that alcohol won’t solve the problem for you. It’s easy to give in to despair and think, “well sure, but nothing can solve this problem so I might as well drink.”

There’s something about the holidays that makes those feelings of helplessness stronger than usual. I don’t have a perfect solution for this because I don’t think one exists.

What I will say is that you have a choice.

You can fall to pieces or you can try to survive the day. Survival looks different for everyone.

Maybe it means finding a meeting or calling a sponsor. Perhaps it’s hopping online to a support network and asking for compassion. Or maybe it’s tuning out the holidays and holing up in your living room with a pizza and The Marvelous Mrs. Maisal.

It’s okay not to be okay.

Maybe you don’t find a way to feel the holiday spirit this year, but if you can get through it without drinking, that’s a HUGE win.

Get through it the best you can without drinking, and then commit to slowly working on healing and turning your life around.

And if you feel like you’re totally on your own right now, we’ve got a great private group on Facebook ready to welcome you with open arms and no judgment.

Don’t Make The Holidays Bigger Than They Are

When it comes down to it, it’s just another day.

I know it doesn’t seem that way because the commercials on TV sell us the magic of Christmas (even if you don’t celebrate) and everything about this time of year is supposed to be wrapped up in holiday cheer.

We all have things we associate with the holidays. Alcohol is often one. Those are hard associations to break and it’s normal to feel fidgety or uncomfortable without alcohol this time of year.

But it’s just another day.

Sure it has better food and gaudy sweaters, but there’s nothing about Christmas, or New Year’s Eve, or a holiday party that warrants derailing your sobriety. You can enjoy all three without alcohol. I promise.

And even if you don’t. Even if the holiday party makes you want to tear your hair out and you end up leaving early, I promise that you’ll feel incredible the next day when you wake up hangover free and still sober.

These wins feel better than whatever buzz a couple glasses of cheap wine will do for you.

As you have more sober holidays, you’ll start to develop new traditions and associations that don’t involve drinking. But until that time, go easy on yourself.

Don’t hype up the holidays and make them something they’re not. Don’t use them to give in to your urge to drink.

Enjoy them. Do the best you can. And keep going.

You can do this! 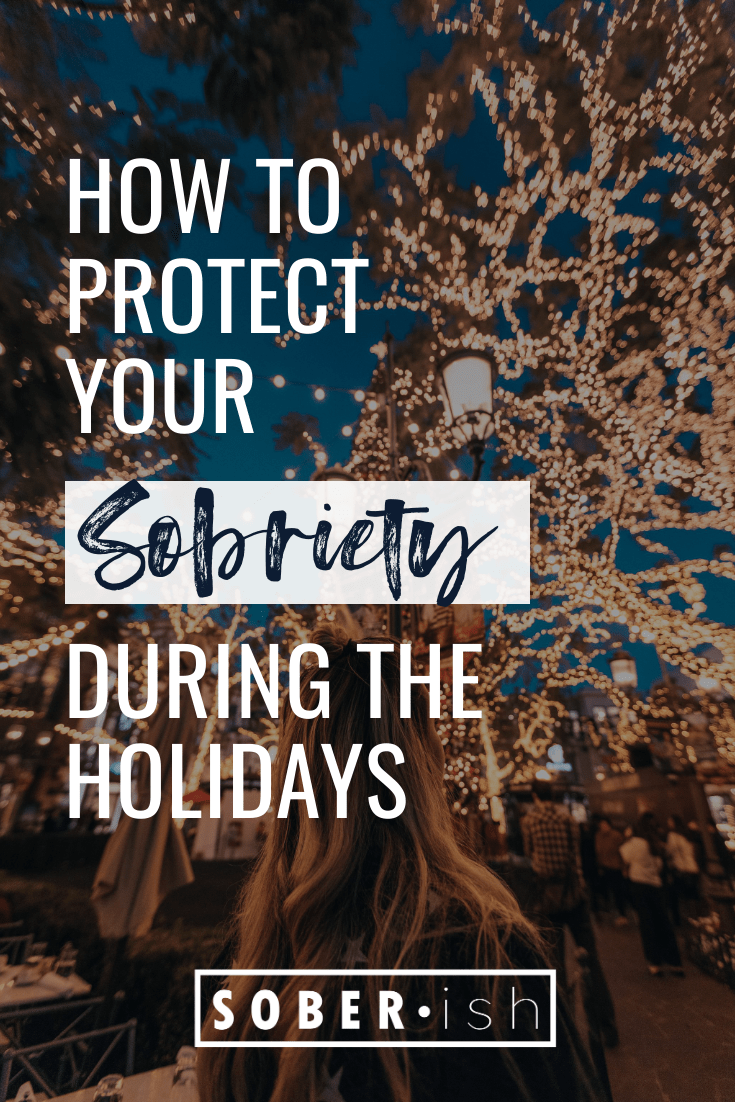 5 Reasons Exercise Is So Critical In Sobriety And Recovery

What Happens When You Quit Drinking Alcohol For 30 Days

The Big Mistake You Should Avoid When Getting Sober